Get fresh music recommendations delivered to your inbox every Friday.
We've updated our Terms of Use. You can review the changes here.

Out of darkness, by magic 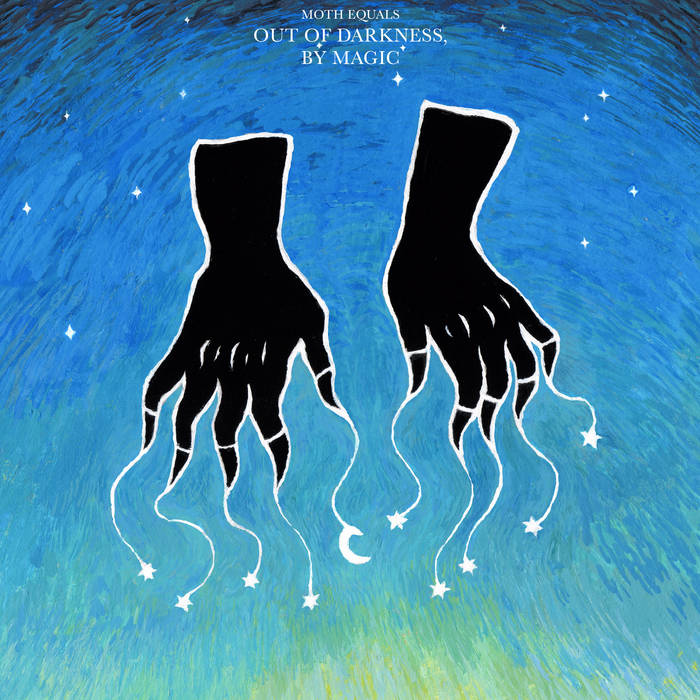 'Out of darkness, by magic' is a new collection of 12 electronic tracks, woven into a folk story about a witch, a pair of magic gloves, and an enormous shark with a penchant for eating stars.

The hungry shark swims free -
cruising the star-punched sea -
and finds our plump, ripe sun
to sate its rumbling tum…

For years it feasts on fire,
smothering the Earth’s pyre,
cursing the pale blue dot
with creeping, icy rot…

So the rumour mills whir,
the gossip-mongers stir:
‘Witches summoned this hell
so we’d plea for their spell!’

Dwelling in these purlieus,
trammelled by their curfews,
cooing verse by moon glow
is a witch named Orfo…

She knows only a mage
can slay this sleek star-phage
to thaw the gnawing freeze,
and draw the warming breeze…

But how to reach such height
And then defeat such might?
Orfo starts to ponder -
then spies the cliffs yonder…

The Stone Titan - of course!
A formidable force,
but to break its slumber
needs magic beyond her…

She asks her familiar -
Teixi, the blue spider -
to weave from gossamer
Gloves of the Osmoser…

Just like udders do milk,
these special gloves of silk
store magic in their tips,
cast by incanting lips…

For years our hero flits
between lamp-lit snickets,
sourcing from sorcerers
the requisite powers...

One century has passed
when she returns at last.
Though her home lies forlorn,
there’s little time to mourn...

But she summits the hill
where Titan crouches still,
she raises her gloved hands
and issues her commands…

“Warrior, awaken!
Our land is forsaken!
Soar to the sun eater
and with zeal defeat her.”

But poor weary Orfo
drops stone-dead in the snow
before the spell can flow
beyond her hands, and so…

Under flurries of flakes,
each silken glove awakes
and shakes off the fresh fall -
the spell cast after all…

The gloves begin to grow,
dwarfing ghost towns below,
till they loom like huge sails
and even the moon pales…

They sweep into the black
razor-tipped for attack.
Slipping behind the sun,
they gut the fish in one...

And out pours the ichor,
restoring the sun’s core.
Fozen flowers unfurl
and blossom devils swirl...

From fingertips silk-spun
shards of stomach-spilt sun
hang by gossamer thread:
jewels on a royal head.

Bandcamp Daily  your guide to the world of Bandcamp

Mille Petrozza stops by to talk about the new Kreator album, plus music by Trauma Bond